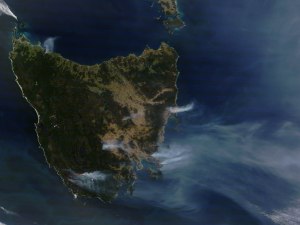 A year ago, if I’d read that environmental activist Jonathan Moylan had issued a hoax press release saying ANZ Bank had withdrawn a $1.2 billion loan to Whitehaven Coal, because he wanted to protest the company’s plans to build a new coalmine in a state forest, and the announcement had temporarily wiped $314 million off Whitehaven’s market value, well, I would have thought, good on him. The forest is home to threatened species, we should be switching to renewable energy, mining companies have enough money, the share price recovered anyway, etc.

And maybe I should have had the same reaction last week. It was so hot that the Bureau of Meteorology had to add new colours to its maps. Bushfires visible from space raged across three states. And I spent much of my time reading about the science of climate change for a feature story I’m working on. There is no debate in the scientific community: because humans burn fossil fuels for energy, which releases carbon dioxide into the atmosphere, the world is getting warmer. As a consequence extreme weather events will become more common.

And yet, and yet. Now I have spent almost a year working as a business reporter, I couldn’t make up my mind what I think about the stunt. Yes, we should emit less carbon dioxide. But should activists spread false information? What about the investors who lost money by dumping shares in Whitehaven Coal when its share price dropped? Is it okay to undermine confidence in the market, possibly making overseas investors more nervous, or making it harder for “Mum and Dad” investors to participate?

I don’t have opinions about that.

But as a relatively new (idealistic!) business reporter, here is something I do have an opinion about. It’s fairly tiresome to see the media get blamed for this. The commentariat called journalists lazy. The ASX said maybe journalists should just report the news more slowly and make sure they get things right.

Wow. Come hang out in our newsroom one day and see the amount of time we spend trying to get things right – googling, asking questions, making phone calls, making sure every story we publish gets read by at least five different people first. But journalists are humans, and journalists have deadlines.

Moylan’s fake press release looks legit. It has a nice ANZ logo, lots of convincing corporate speak, a quotable quote, and two media contacts at the end. Activists don’t send out hoax press releases every day. It’s not something I’m on my guard for. I don’t report on mining, but hypothetically, I can imagine if this turned up in my inbox, I would be fooled.

Next I flatter myself I would call the first media contact listed to find out a bit more information. Although the release lists “Group Head of Corporate Sustainability Toby Kent”, this was Moylan’s mobile number. According to The Oz, he “answered the phone as Toby before admitting to the hoax and apologising to anyone embarrassed or deceived”.

Right, at which point in the hypothetical I would know it was a stunt. But let’s consider two further hypotheticals: 1) what if the media contact didn’t reply before deadline, and 2) what if it was just a really good hoax?

Situation 1) is not unlikely. In particular, I recently dealt with the real ANZ media team, because the bank released a statement about how they are doing quite well out of selling life insurance. The ANZ media contacts page lists two names, and a generic email address, and one phone number. I called the phone number and found out it wasn’t either of the media contacts’ numbers, but a switchboard. I asked to be put through to the media team, got their voicemail, and left a message. I repeated this maybe a couple of hours later. The third time I called, with the clock ticking, I asked for one media contact’s direct email address.

“I’m sorry,” replied the receptionist, “I can’t give you his email address. He’s the only one at liberty to give that out.”

Exclaiming to the newsroom, I proceeded to google one media contacts’ name, note that his email address was the fourth result, and send him an email. A kind senior journalist heard my frustration and dug his mobile phone number out of a fat contact book for me. I called it and we had a nice chat about how life insurance makes the bank a bunch of money, although he politely refused to tell me how much.

Imagine if that statement had been a hoax and I hadn’t been able to get in touch with anyone.

Consider situation 2) – a convincing hoax. Remember a few years ago, when Hungry Beast ended up on Media Watch for making a fake press release? That was sent out by a fake research institute with a fake website? They even had a fake spokesperson spruiking it on the radio.

Hypothetically, if I got a release and a report from a place with a convincing-sounding website, and I called the PR person to ask questions, and they answered them, I would believe it, and I don’t think that makes me lazy or hasty. It just means that Hungry Beast made a really good hoax.

I’m glad this is all hypothetical.

Part of me is really defensive about this whole situation. Go on, you try and be a journalist, I think to myself. It’s easy enough to post a comment calling journalists lazy. It’s much harder to keep ringing people all day and try to make them talk to you when they don’t want to.

But another part of me despairs. I really do want to get things right. I really would feel bad if I published false information. Did I miss the lecture at uni on how to spot a convincing hoax?

If you have any advice on not being fooled, I would love to hear it.